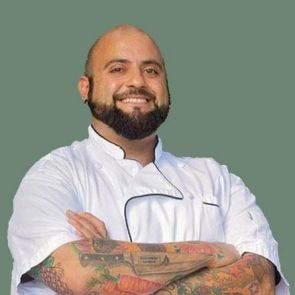 Food is such an important part of Windsor resident Sergio Valencia Trejo’s life that most conversations become filled with memories of traditional dishes or ideas for modern ones. His passion for food and cooking comes from his early childhood experiences in Mexico: helping on his grandfather’s ranch, milking cows, making cheese and cooking with the whole family. Sergio came to the US with his parents when he was ten years old, leaving behind his grandparents and the ranch life. However, the seeds were planted, and would lead to a fulfilling career as a chef.

Like many other immigrants, when Sergio’s parents moved to Sonoma County they started out with next to nothing. Through years of hard, dedicated work, his dad built his own tile company in Santa Rosa, while his mom worked for a local school district, all while raising three sons and a daughter. Sergio says that his parents’ strong work ethic and their success inspired him and his siblings when it came time to launch their own careers.

After graduating from Elsie Allen High School, Sergio took a few general education and culinary classes at SRJC, but dropped out because a career in sales seemed more promising. He worked for Pacific Snapple, but after the company was sold to 7Up and he reconsidered completing his education, he returned to college to study culinary arts.

While taking classes toward two certificates—Culinary and Baking & Pastry—Sergio started cooking professionally and worked for a retirement home in Healdsburg. There, he mastered managing a kitchen and following strict food safety codes and regulations. His first restaurant job was at the highly regarded Willi’s Seafood & Raw Bar in Healdsburg, where Sergio specialized in preparing huge amounts of oysters, salads and ceviche. After Willi’s Seafood, he took up a new challenge: he ran the kitchen, revamped production guides and updated the menu at Tres Hombres restaurant in Petaluma. After that, he took his talents to Belly Left Coast Kitchen & Taproom in Santa Rosa. His skills have also been put to good use at SRJC’s Culinary Center, where he created the 2014 Valentine’s Day dinner and designed a six-course menu for 60 guests.

Sergio embraces challenges. 2015 saw him splitting his time working at Lynmar Estate Winery in the Russian River Valley, where he created food for wine pairings, and at Spoonbar Restaurant in Healdsburg, as part of a team dedicated to modern cuisine. He also took on many creative private chef projects. Sergio plans to travel in the near future, in order to explore and be inspired by the cuisines of Cuba, Mexico, Morocco and Spain. Meanwhile, he is already setting the wheels in motion to open his own catering business, in collaboration with one of his best friends.