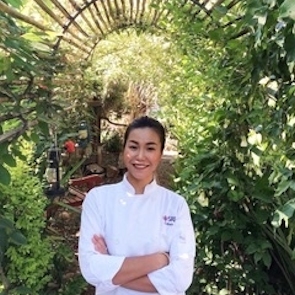 For many students today, the path to a fulfilling and rewarding career can be difficult to discern. California’s Community Colleges are here to help, supporting students in choosing an area of study that fires their passion and secures them a livelihood.

As a young college student, Kyla Lam enjoyed her time working as a server in a local restaurant, but it wasn’t a field that she seriously considered as a possible career choice.

In 2017, Lam earned her A.A. in Social Behavior and an A.D.T. in Business from Santa Rosa Junior College (SRJC). She was preparing to transfer to Sonoma State University when fate intervened. Kyla was informed that she had been selected for a scholarship, but would need to take a few additional classes at SRJC in order to qualify for the funding. She asked her counselor what courses were immediately available to take, and was directed toward a handful of culinary classes. “I love cooking and eating,” Lam said. “When the counselor said culinary, I was really interested in it and I asked myself ‘can I get something out of it?

Lam said she had enjoyed her work as a server and later, front of house manager, but again, she hadn’t thought of either as a potential career. The daughter of Chinese and Vietnamese immigrants, her parents had encouraged her to go to business school. Culinary classes changed her outlook on the industry, in part as she was forced to relearn many concepts that she’d already experienced in a work environment.
“When I took Betsy Fischer‘s class, she taught me a more professional view of these kind of jobs,” Lam said. “She taught us how to serve correctly, how to increase sales and how to offer great guest service.”

She also met many other highly motivated culinary arts students, who helped share and instill that same drive in their classmates. While attending class, she enjoyed watching fellow students work in the SRJC Culinary Café and Bakery and working side by side with students developing their skills in all aspects of the industry.

“At the Culinary Café, all students are hands on, and they get experience before they graduate out of the program,” Lam said. “I saw them cooking and having fun. There’s so much movement and passion. Being around people who do what they love, it is incredible!”

Between the energy of her fellow students and the personal coaching and mentoring provided by Betsy Fischer, Lam found that she had changed her mind about the career potential of Culinary Arts. “It’s great to see other people achieve their goals and find their way,” she said. “There are many different kinds of jobs in the culinary field. I took all the classes. I love serving customers, I love being around people. I love being active in the back and I love being creative.”

Kyla reflected that with her newfound skills she can pull off just about any dish or kitchen task that she can think of, even just re-assembling leftovers into a delectable new dish. While she sometimes writes down a great recipe she has learned, she rarely makes the same thing twice because she is constantly driven to create something new. Her creative instincts have found another outlet in food photography, a new hobby of hers. “I like plating because you can make it look good before you eat it,” Kyla said. “But, it can be ugly and delicious, so it doesn’t always have to be perfect.”

In her first semester attending SRJC’s culinary program Kyla took 18 units and was in class six days a week. She was constantly rushing between classes, the majority of her time spent either cooking or studying. “I loved it so much, I didn’t complain,” she said. “It’s weird because I never found a career I loved before.” After two months of class, she decided not to transfer to Sonoma State University, instead using the scholarship funds to earn two culinary degrees and four culinary certificates in the space of just two years.

Lam graduated in the spring of 2019 and started working for Rodney Strong Winery in Healdsburg, CA as an Assistant Chef. Her entrepreneurial spirit was fostered by working as a private chef, often locating work through her connections at the college. Betsy Fischer’s continued support in connecting students with employers was an invaluable source of support.

“At Rodney Strong Winery we cook for events, and I do weekend food and wine tasting and also pizza tasting,” Lam said. “The chef changes the menu all the time and I love that. I really want to work in a place where I can learn more.”

Kyla feels strongly that completing the culinary program at SRJC gave her the knowledge to succeed and the confidence to step into any role in the kitchen or the front of house, but she was not done learning. After graduating and working for six months, Kyla decided to travel to hone her culinary skills in other countries. “I went backpacking all over Europe and Asia because I want to eat and cook for people,” she said. “I worked for some restaurants to experience the environment. Local people let me stay at their house and in return I’d be a private chef for a night. So, I was cooking a lot of stuff for different types of people.”